We are currently working on a project to identify the convicts who came through the Port Arthur penal settlement, as not every convict who came to Van Diemen’s Land (Tasmania) came here. To produce a more accurate figure, every conduct record in existence for Van Diemen’s Land (more than 75,000) must be read and recorded. The records are held under the custodianship of the Archives Office of Tasmania.

Records of those who came to Port Arthur include details such as their original trial place, transportation offence and sentence, place of origin, age on arrival, trade, offences committed after arrival in the colony, locations they were at and freedoms gained. These details are now being entered into a database.

The database does not solely consist of the details of male convicts. Female convicts were also at Port Arthur as assigned servants, but not under secondary sentence as were the men. Those who arrived free, as well as others with some association with Port Arthur, will also be included in the database. We are also identifying those convicts who spent time at other stations on the Tasman Peninsula.

The database is not yet complete, but limited fields can be searched by the public at two computer terminals located in the Convict Study Centre in the Asylum.

If you are seeking further information on convict ancestors, see the Convict Enquiry Service.

Isle of the Dead, Monuments

Monitoring and conservation of the monuments on the Isle of the Dead have been carried out since 1990.  The program began with a condition survey undertaken by Artcare which identified three main factors affecting the long-term stability of the monuments:

Conservation treatments have since been implemented to stabilise the monuments. The removal of Portland cement is being carried out incrementally in order to assess alternative treatments and to ensure that the removal does not cause further damage. Surface consolidation treatments are being tested to best mitigate against disaggregation.

Both treatments are being monitored and reapplied with the most recent survey having been performed during April 2019. Additionally the monuments were laser scanned in 2013, providing us with another powerful tool to monitor deterioration and movement. 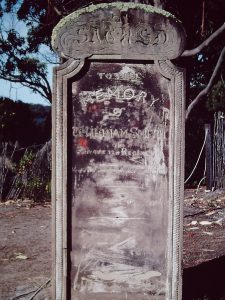 William Smith’s headstone in 1991 prior to conservation works 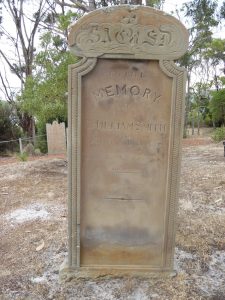 Isle of the Dead, Walkways

The Port Arthur Historic Site Management Authority (PAHSMA) is constructing new walkways on the Isle of the Dead.

Currently access to the Isle involves a large number of steps and poorly defined pathways. The new walkways are designed to substantially improve access for visitors to the Isle and will provide a route that will reduce the potential for visitors to impact the unmarked graves and vegetation. Apart from a conservation perspective, we are aware that many visitors are uncomfortable with the notion of walking over graves. New viewing platforms at key locations will provide better opportunities for guides to interpret important features of the Isle.

The project is being undertaken in four stages. Stage 1 and 2 were completed between 2017 and 2018, while Stage 3 will be completed in June 2020. The last stage will be rolled out over 2020-2021 financial year. Funding from the Commonwealth Government’s Protecting National Historic Sites program assisted in the design of this project and the construction of Stage 1. 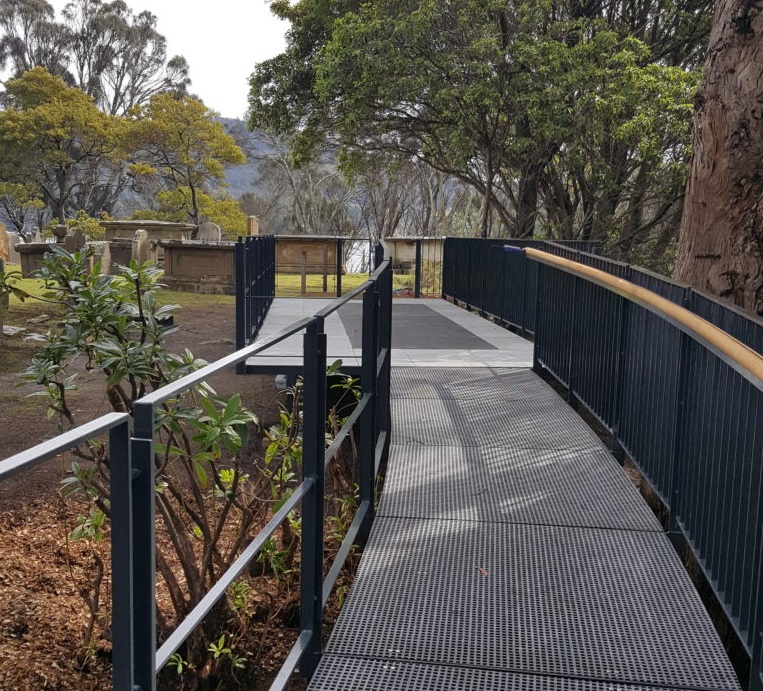 PAHSMA is embracing technology to improve conservation efforts and the monitoring of significant fabrics. Recently we engaged PDA Surveyors to undertake 3D laser scanning of the retaining walls and ruins featured throughout Port Arthur and Point Puer. The objective of the project was to gather reliable baseline data that could be used to monitor the structures.  The 3D point cloud datasets produced from the project are an extremely precise and detailed record of the structures’ present condition.  By comparing future laser scans with those collected, we shall be able understand and track all changes occurring to the structures – including changes caused by structural failure, subsidence, erosion, deterioration and vandalism.  This information will allow PAHSMA to target conservation efforts and improve our conservation treatments. 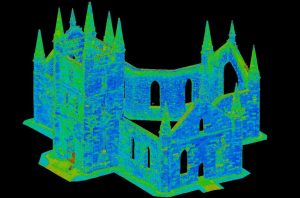 These sealed doors have been installed to help control the internal environment of the house museums, protecting the interior fabrics and curatorial items from environmental damage. The doors were designed to ensure that they have minimal visual impacts on the appearance of the buildings and to close quietly behind visitors entering and exiting the museums, allowing for a better visitor experience. 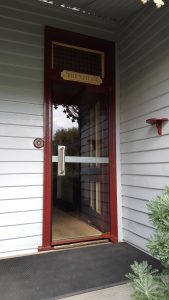 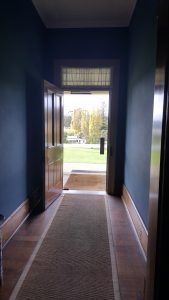 The Port Arthur Historic Site is one of the most visited tourist attractions in Tasmania and is often a visitor’s first introduction to Australia’s convict heritage. As such PAHSMA has a significant role to play in introducing both domestic and international visitors to this important part of the Australian story and cultural landscape. In 2015 PAHSMA embarked on a large-scale project to redevelop the Port Arthur Visitor Centre. This was a response to demands on the building during peak visitation periods exceeding the capacity of the internal planning arrangements. It is the gateway and entrance to the Site and the commencement point for personalised visitor engagement with interpretive themes and experiences. Following a process of rigorous research and consultation, five thematic pathways were identified during the presentation planning process. These thematic pathways provide direction for the Gallery interpretive content and offer an opportunity to deliver the larger context that wraps around the Site by grounding it in the stories of Port Arthur. The pathways are:

These themes have been used to support a ‘zone’ approach to the Gallery and also provide opportunities for layering and integrating content across the gallery and the Visitor Centre as a whole, providing audiences with a sense of seamlessness. They are delivered through direct messages and also presented implicitly through objects, images, film, and hands-on activities. In particular, we have been able to include the stories of the local community and the tragic events of 1996 and to better introduce our visitors to the Australian Convict Sites World Heritage Property. The Port Arthur Gallery redevelopment cost $855,000.00. 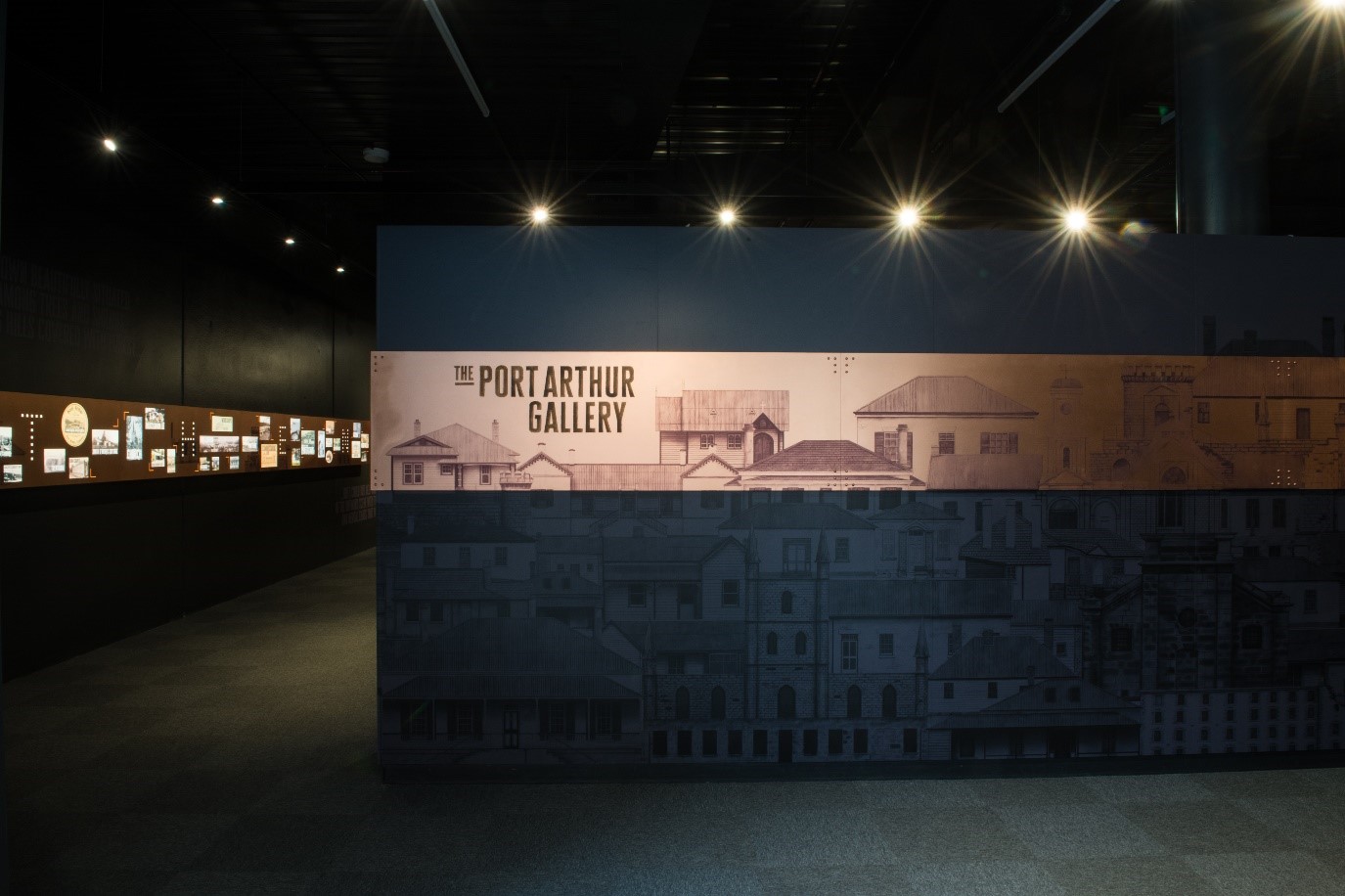 The project has also supported research by Caiti Dircks and Chloe Hamilton on the material recovered from excavations in 1977 at the First Prisoners’ Barracks at Port Arthur; Jen Jones’ study of the material culture of tourism at Port Arthur; Jane Rooke’s consideration of material from the Cascades Probation Station at Koonya and a re-evaluation of the sequences from the Clerk of Works house by Leah Byrne. 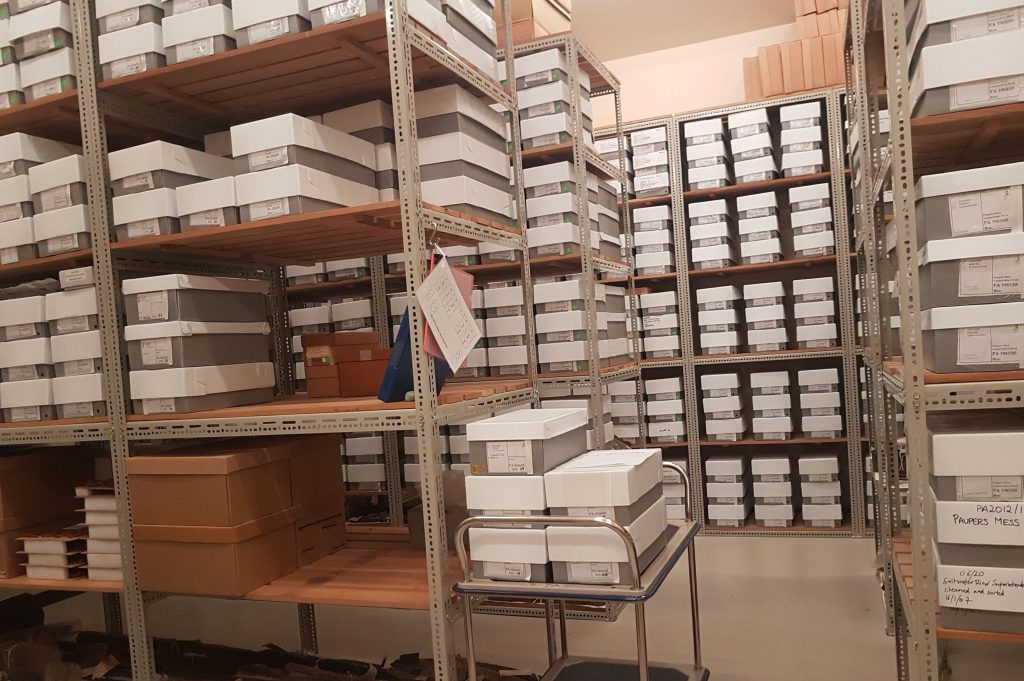 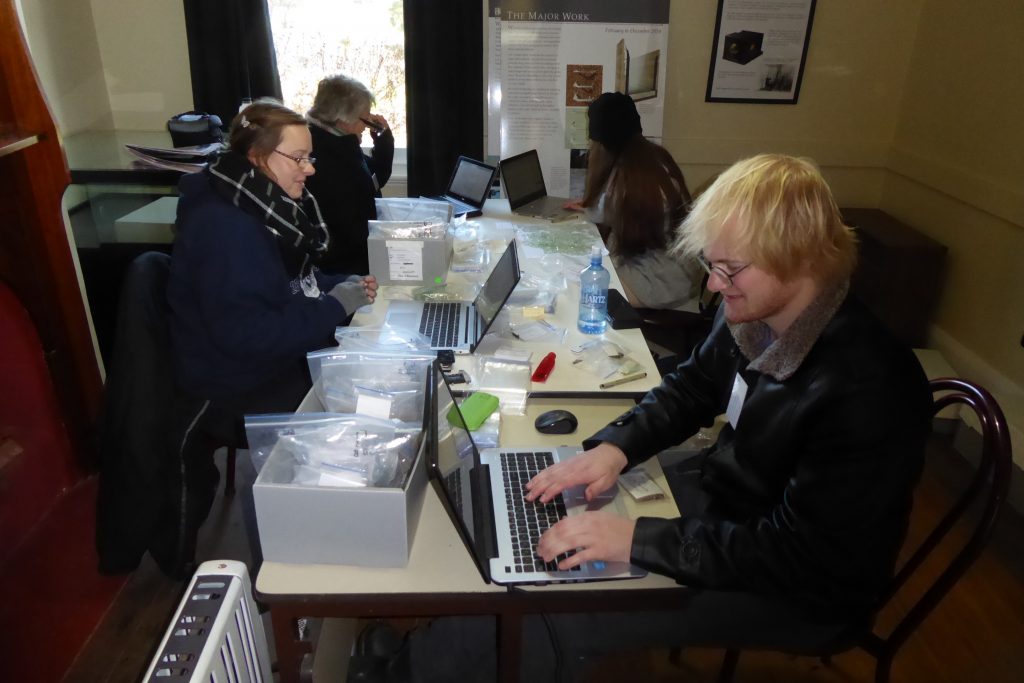 Following a major storm in 2011, PAHSMA undertook a structural assessment of the Penitentiary that indicated that the support framework, installed in the late 1970s, urgently needed replacing. Engineering reports showed the brick walls needing structural stabilisation, setting the stage for the large-scale conservation project. Having lost the majority of its internal timber framework over 100 years ago, the structure was vulnerable to the environment – including high winds, earth tremors and wave impact from the adjacent sea – an engineered solution was designed to combat all these potential threats.

PAHSMA’s conservation works involved a series of large steel columns, levered off reinforced concrete strip footings underground. The columns were fixed to the wall using a steel bridge with anchor points (just like gecko toes). These are adjustable to allow the anchor points to avoid fragile areas of the brickwork.

The building was strengthened by inserting concealed strengthening rods down through the walls, secured by a specialised grout. Combined with a steel top plate, these additions add strength to the higher sections of the wall, which were most vulnerable to collapse. And then 5 kilometres of helibar reinforcement was added, this was inserted into the grout of the Penitentiary.

With significant ground disturbance required to allow for the footings of new stabilising columns, we saw an extraordinary opportunity to combine both mitigation and research needs and undertook a program of archaeological excavation. The excavation provided us with a better understanding of the conversion of the granary into the Penitentiary and we were excited to find not only evidence of the water-wheel pit but also the remains of workshops built on the site before the granary and flour mill were constructed.

The Precinct Conservation Project was a $7.3 million project. 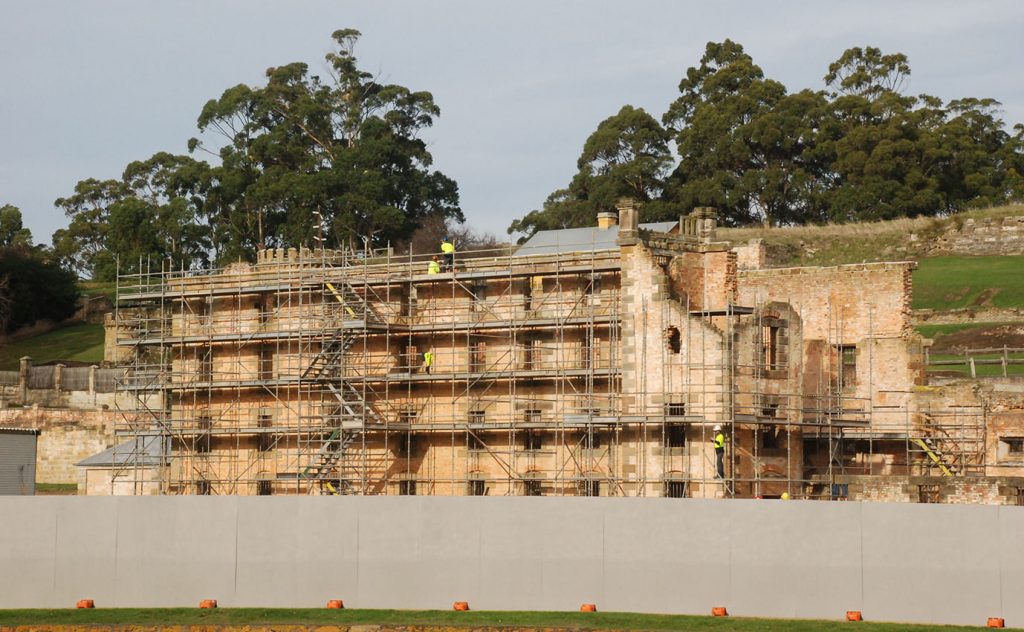 The Separate Prison is one of the most significant buildings in the entire Australian convict story. Like many of Port Arthur’s buildings, it has suffered the effects of time, weather and human interference (including a plan to turn it into a hotel). An extensive program of conservation and interpretation works have been performed to vastly improve visitor experience and to ensure that the building and the heritage that it enshrines remain for future generations.

Conservation works heavily involved the removal of poor or inappropriately reconstructed building materials and the reinstatement of traditional elements. All efforts were made to retain and conserve original materials.

Interpretive works aimed to create a sensory environment in which the Separate Prison building is given life. Through re-introducing the sights and sounds of the Separate Prison, visitors can be immersed in a full experience of this extraordinary building, its stories, and its people.

Internally, the prison now presents in a manner that is historically accurate, while the prison’s ‘B’ Wing portrays an important part of the building’s post-convict history – its decline through fire and abandonment.

With the major conservation and interpretation project concluded, additional smaller projects are being enacted to continually conserve and interpret the prison and its stories. 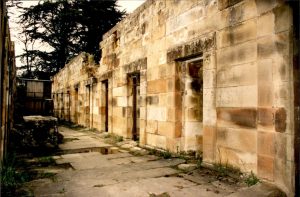 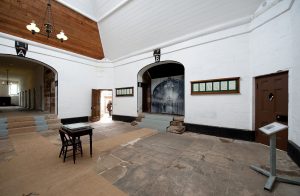 Restoration of the Separate Prison completed 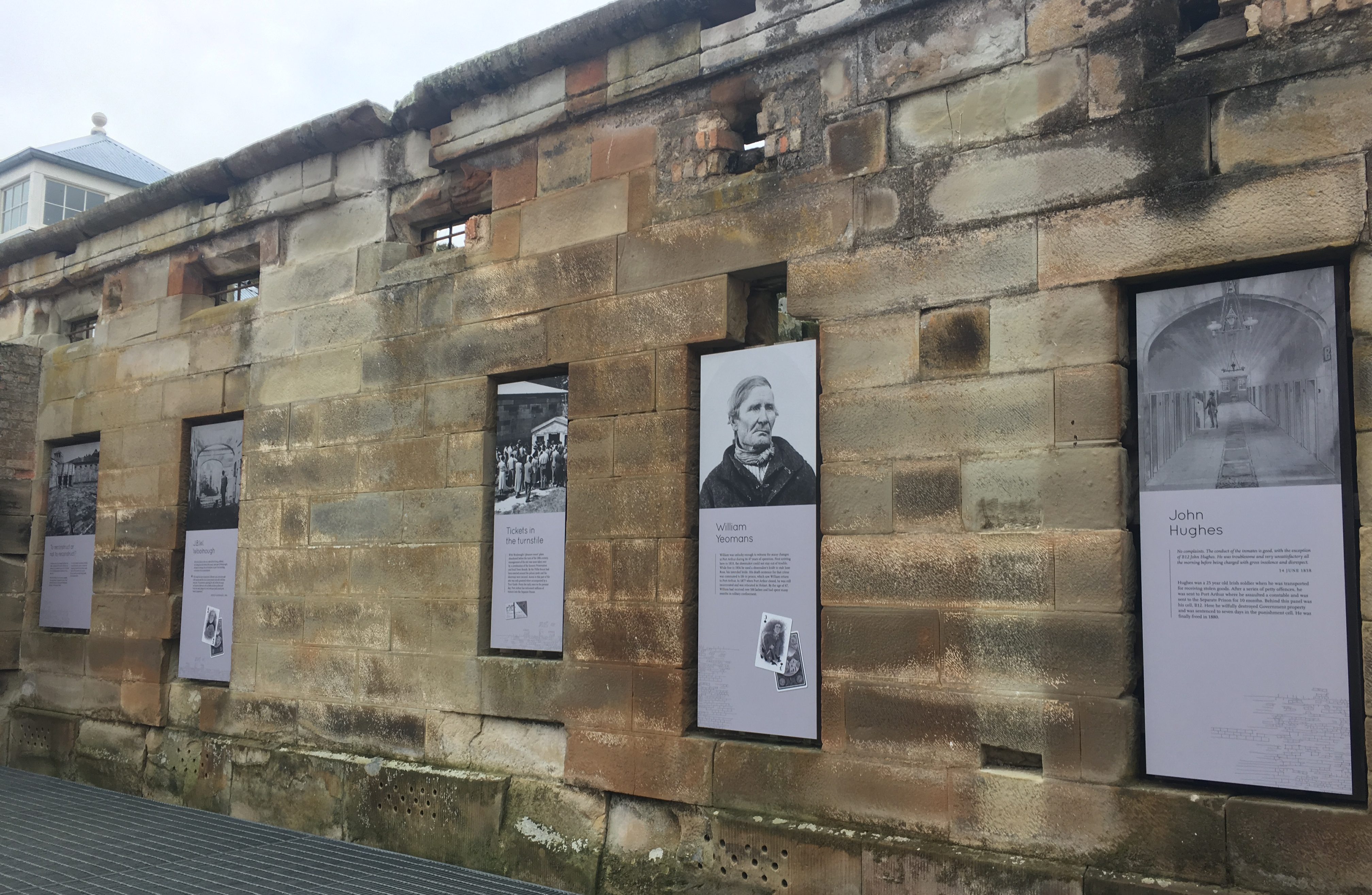