Today this area is silent and almost empty. But if you had been here between 1834 and 1848 you would have seen a collection of small and large wooden sheds clustered around two large docks.

In the largest shed, a vessel 25 metres long is taking shape. On a small slip nearby a whaleboat has been drawn up for repairs. Around these vessels swarm men in coarse woollen uniforms, with brown leather caps on their heads. Other men work up to their necks in the cold water, repairing another vessel just offshore. A timber-carrying gang is emerging from the bush, bringing a log to the sawpits.

Other convicts sweat in the heat of the blacksmith’s shop, forging iron and copper fittings for the ships. You would have heard the rasp of saws, the clash of metal on metal, men shouting to one another. You would have smelt sawn timber, burning charcoal and hot pitch. Today only bird songs and the sweet smell of the bush fill the air.

But go closer, explore this place with all of your senses. Can you hear the echo of those long-dead men and their labours? Can you see the shadows of their former workplaces?

THE DOCKYARD – A BRIEF HISTORY

Throughout colonial Australia, only three dockyards used convict labour to build both the yards and the ships; the Port Arthur Dockyard was one of them. The other two were Sarah Island on Tasmania’s west coast, which closed just as this yard opened, and the first Sydney dockyard.

Opened in 1834, the Port Arthur Dockyard mainly supplied and repaired ships for the government; it also repaired some private vessels. It was located away from the main settlement, to reduce the ‘corrupting communication’ between convicts and free sailors. The workforce built a great variety of maritime craft including barques, brigs, schooners, cutters and whaleboats. These vessels transported convicts, supplies, raw materials and manufactured goods between Port Arthur and other colonial ports. The men here built some of the biggest ships in the colony at that time.

A free Master Shipwright and convict overseers directed production in the yard. Up to 80 adult convicts and boys from Point Puer formed the labour force. Like all the worksites at Port Arthur, it served two purposes. The hard work was meant to help reform the men, but their labour was also expected to be as productive as possible. Men who were sentenced to hard labour worked in gangs, carrying timber; well-behaved men were given the opportunity to learn a trade.

You might imagine that men forced to labour work reluctantly, resentfully and slowly, and take no pride in their work. But these convict-built ships were as good as any built in the colony.

John Watson was the Master Shipwright until 1836; he was followed by David Hoy. Both men seem to have taken seriously their responsibility to reform the convicts under their charge. John Watson’s grandson described how his grandfather had taken a ‘very desperate character’ and turned him into a productive worker by treating him ‘like a human being and not as a caged beast’. In general Watson found the men, no matter how ‘dangerous’ and desperate’ their reputation, ‘most willing to learn a trade [and] some of the boys turned out very well’. David Hoy also enjoyed a good relationship with his workers, and was proud that many of them became ‘respectable and useful’ members of colonial society. Walter Paisley, who learned his trade here as a very rebellious Point Puer boy, was still making whaleboats 50 years later. 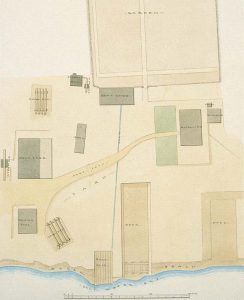 In this building blacksmiths toiled at two forges. These skilled men worked in iron and copper; they made and repaired the tools, as well as the chains, bolts, anchors and fittings for the rigging. In 1841 a new building was built for the blacksmith, on the present location of the Clerk of Works’ house.
The original blacksmiths’ shop was converted to accommodation for overseers. 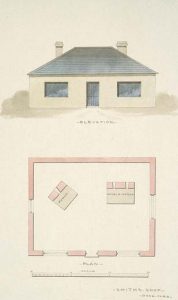 There were two sawpits, located either side of the Blacksmiths’ Shop. Most of the timber used in boatbuilding came from the surrounding forests. The timber carrying gang brought logs to the sawpit; these were sawn up by as many as six pairs of sawyers into timber for frames, keels and planking.

There were two docks for large vessels and a slip for smaller boats. These were the focus of all Dockyard activity. One of the large docks, dug by convicts in 1835, is still visible, though a limekiln (No.5) was built in the other in 1854. The small slip is no longer visible. 15 large vessels, the biggest weighing 286 tons and measuring 30 metres long, and more than 140 smaller boats were launched from these docks.

Much of the activity took place on the water. When the hull of a vessel was completed, it was launched and anchored offshore; there the fit-out of the decks, mast and rigging continued.
Small boats and barges ferried men and materials between the ship and shore. When vessels pulled into Port Arthur for repair, they were sometimes careened in shallow water on the rocks so that men could work on the bottom of the vessel. Men engaged in these repairs often worked in water up to their necks.

Lime formed an essential ingredient in mortar and plaster, vital to Port Arthur’s building and maintenance projects. Lime was also used as fertiliser and for tanning.

The limekiln was not part of the Dockyard complex. It was built in a disused dock in 1854, at the height of Port Arthur’s industrial operations, and remained in use until 1874. It is a good example of an inverted bell-shaped kiln. The kiln burned local shells and limestone that was imported from Hobart. The raw materials were fed in from above, and the fire maintained through a hole at ground level below. After firing, convicts shovelled the lime out of that hole. They hated this job; the lime and dust burnt their skin, giving them blisters and making their hair fall out.

This was one of the first buildings in the Dockyard, built for John Watson and his family in 1834. It was not only his home, but his office, the ‘nerve centre’ of the Dockyard; from its windows he could survey all its activities. Here ships were designed, records were kept and orders were given. A convict clerk worked in the tool store next to the kitchen, issuing the valuable tools and keeping the accounts.

John Watson left in 1836 and was replaced by David Hoy. Hoy had been at Macquarie Harbour for six years, where he had been in charge of ship-building with ‘no assistance but from prisoners taken out of the gangs, only one or two of which had ever handled a sharp-edged tool’.

He claimed to have turned them into shipwrights equal to any in the colony in three years. His personal history illustrates the dangers of working in a 19th-century dockyard; he injured his back when spars fell on him at Macquarie Harbour, and fractured his skull after scaffolding collapsed
under him at Port Arthur. When Lady Franklin met him in 1837 she described him as ‘an old man’. He was then about 50.

The Master Shipwright’s house is the only building that survives from the ship-building period. It is built using brick-nogged construction, an old technique that creates a strong and well-
insulated structure. The house was once surrounded by outbuildings – a pig sty, poultry shed, store, privy and laundry. The small garden in front was probably the shipwright’s wife’s domain, where she grew flowers and herbs. Behind the house lay t e large food garden (No.7).

When the Dockyard closed in 1848 this house was occupied by a succession of civil officers, including the commissariat officer and the schoolteacher. After Port Arthur closed, the house passed into private hands but was resumed by the government in the 1950s. It narrowly escaped demolition in the 1970s. 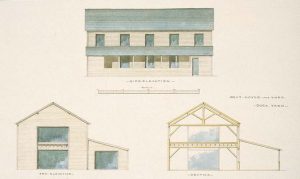 Government rations were dull and often poor quality. Free people were issued the same as convicts – fresh or salted meat, flour, oatmeal, salt, tea, sugar, and fresh vegetables when available. But unlike convicts, free people had gardens where they could grow extra vegetables and fruit. Records show that they grew gooseberries, currants, strawberries and blackberries, as well as radishes, potatoes, cabbages, carrots, turnips and onions. While we do not know what the Master Shipwright grew here in his garden, we may assume it would have made a welcome addition to his table.

Next to the Clerk of Works House (No. 11) stood a large double-storeyed structure comprising a boat shed, open shed and toolstore. The top level was a moulding loft where the full-sized patterns for the vessel were chalked out. Timber moulds were then made on which the construction was based. The toolstore was a secure area where the Dockyard’s valuable tools could be kept when not in use.

Another boat shed (No. 12) was located below the garden in which smaller craft such as whale- boats were built.

Timber lengths were placed in a long steaming box set over a boiler. The steam made the timber supple, and it could then be bent into keels, frames and hull planks.

Up to five convict overseers worked at the Dockyard. They ensured that the convict workforce carried out its orders. Master Shipwright David Hoy employed a number of free men as overseers to try to improve discipline.

Port Arthur’s military garrison was responsible for security. Boats and tools were a tempting target for would-be escapees, so three soldiers were stationed at the Dockyard on watch each night. According to regulations, they were to be ‘most vigilant that nothing is taken away; to take into custody any prisoner lurking about his post or out of the Master Shipwright’s quarters without bearing a written pass; to hail all boats passing and repassing; to be most careful that no fires are left burning…; not to quit their post except for the purpose of reporting anything extraordinary they may have observed; to keep an eye on anything they observed floating or drifting in the water…

The Sentinel is not to enter the hut in his hours of duty; to patrol frequently about the yard during his hour, his attention to be particularly directed to any boats that are ready for launching; to answer the Sentinel’s call of ‘all’s well’ at the settlement every half hour’.

Despite these precautions, four prisoners stole a boat from the Dockyard and escaped in 1835; they were later recaptured.

⑪ THE CLERK OF WORKS’ HOUSE

This house is not part of the former Dockyard complex, but was built over the top of the 1841 Blacksmiths’ Shop and an earlier sawpit. The house was constructed after 1848 and was occupied by a number of officials during Port Arthur’s later years, including a chaplain and the clerk of works. After the settlement closed the house was privately owned. 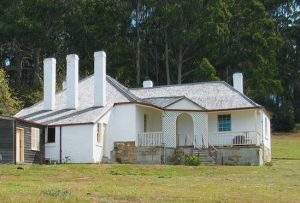 It is important to note we are a fully vaccinated site, which means that everyone must provide proof of vaccination and wear facemasks unless there is demonstrated medical exemption.

Thank you for helping us to keep our community safe.