The Separate Prison was built on a hill at the edge of the settlement. Its isolation and high walls were designed to threaten anyone contemplating disobedience with a mysterious and awful fate. When it was built, new ideas about reforming criminals were sweeping the world. It was now thought that physical punishment only hardened a man. But in a quiet, ordered atmosphere a man could contemplate his sin and change his life. A new kind of building was to deliver this new system.

The architecture and regime of Port Arthur’s Separate Prison were based on those used at Britain’s Pentonville Prison (1842).  Like Pentonville, Port Arthur’s prison had four wings radiating from a central area allowed for close and constant surveillance. Unlike at Pentonville, the cells here were smaller and there were special punishment cells, which took solitary punishment to a new level of cruelty. For any misdemeanor a man was locked in total darkness and silence for between several hours and 30 days on bread and water. After 3 days he was taken out for an hour’s exercise each day.

Each new arrival spent 4 to 12 months in the Separate Prison, before being assigned to work outside on the settlement. Upon entering the Prison each man was allocated a number; his name was no longer spoken. He was only to communicate with staff. The corridors were laid with mats and guards wore slippers so that they could hear his every sound. They checked on him constantly through a peephole in his cell door. Apart from chapel, cleaning duty and an hour’s exercise, he spent 23 hours of every day in his tiny cell in solitude and silence. He had a small table, stool, bedding roll, night soil bucket and corner shelves for eating utensils, personal items, cleaning kit, Bible and prayer book. Here he ate, slept and worked at tailoring, shoe-making, picking oakum, mat- or broom-making. Outside his cell he was masked to prevent him from making contact with other inmates. He also exercised alone.

In chapel he stood screened from his fellows in an individual booth, supervised by four armed guards.

Medical Officers monitored his mental and physical health, hygiene, rations, clothing, bedding, and exercise regime. We know of no case of mental collapse under this regime; such a diagnosis was almost impossible to establish, since all convicts were assumed to be malingerers. But such breakdowns do occur in modern prisons, which have many of the elements of the separate system introduced at Port Arthur.

The building was almost destroyed by bush-fire in 1895 and restored in 2008-11, with considerable lime-washing and the odd information panel installed since then! 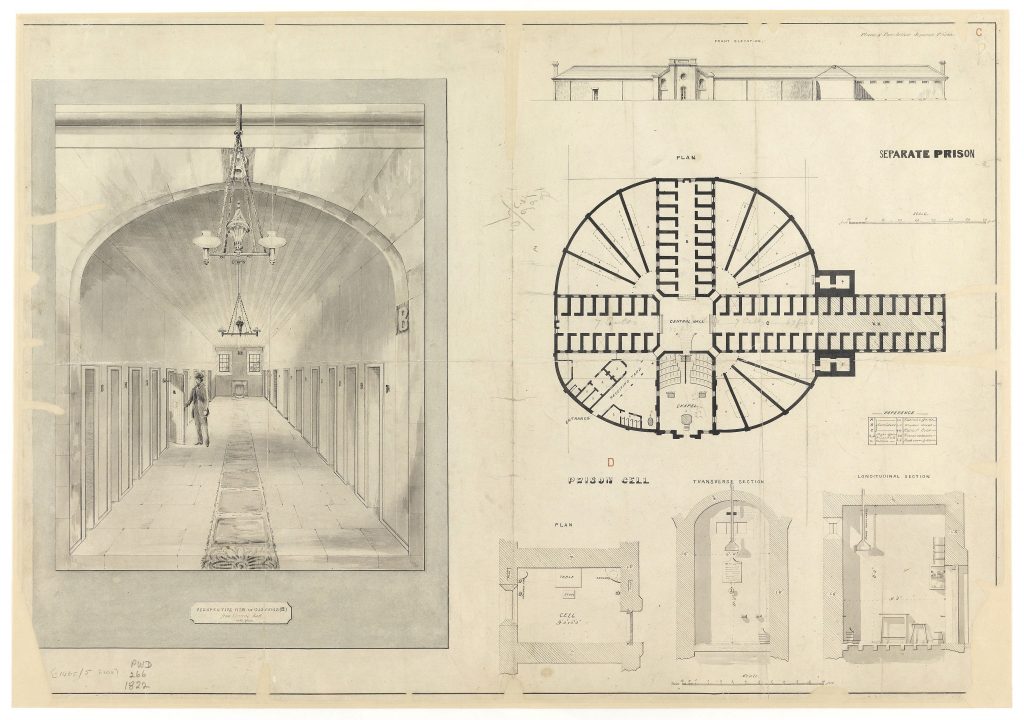 This plan of the Separate Prison shows great detail of inside the cells, the exterior elevation and an illustration looking down B Wing. Image courtesy of the Tasmanian Archives and Heritage Office.