This building was originally built as a flour mill and granary in 1845 to supply he settlement with flour. Grain was to be ground by either a water-powered mill or, when the water flow was inadequate, by convicts walking on a treadmill. The venture failed and the building lay empty until, between 1854 and 1857, it was converted into the Penitentiary you see today.

The new Penitentiary had 136 separate cells on the bottom two floors for those whom one Commandant called ‘the lions’ – ‘prisoners of bad character under heavy sentence’. They had to be separated from each other and from the better-behaved. The men ate and slept here but worked around the site and across the peninsula. Above the cells was a dining hall (which doubled as a school room at night), the prisoners’ library of ‘useful and entertaining books’ and a Catholic chapel. On the top floor was a dormitory for 348 better-behaved men.

At the western end were a kitchen and bakery. In front was a yard surrounded by a low wall. Here men were assembled to hear prayers and be counted before and after work. The laundry and toilet block lay behind the main building. It included sheltered exercise yards with fireplaces, toilets, a clothing store, laundry and drying room. As the harsh regime relaxed in the early 1860s, the big central room became a ‘day room’ or ‘smoking room’, with seating and a fireplace at one end.

The Penitentiary (and Flour Mill & Granary that came before) symbolise the machine of reform at work, containing within itself both the machinery of punishment and of self-improvement.

It was gutted by fires in 1897 and bricks were taken away to build many local houses and sheds. 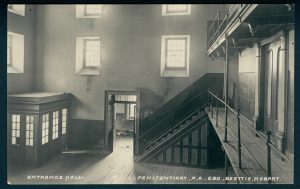 Inside the Penitentiary main entrance, the office is visible in the left corner.